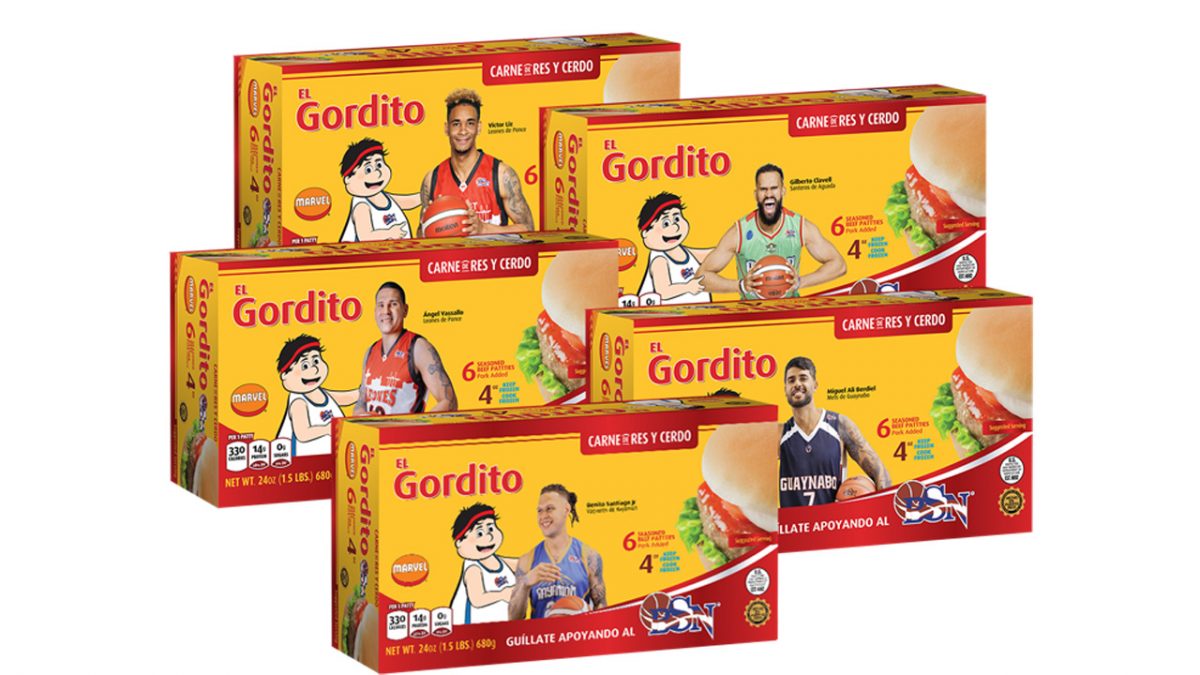 As support to the local sport and to encourage the participation of the fans of the PR National Superior Basketball League (Baloncesto Superior Nacional), also known as the “BSN”, El Gordito from Marvel has made an alliance with the BSN as known in Spanish to launch a new collection of packaging featuring five of the most known players from Puerto Rico. With this new alliance, the local manufacturer became for the first time one of the main sponsors of the BSN 2021 season as part of its support for the Puerto Rican athletes and teams.

Ángel Vasallo and Víctor Liz from the “Leones de Ponce”, Gilberto Clavel from “Santeros de Aguada”, Miguel Ali Berdiel from the “Mets de Guaynabo” and Benito Santiago Jr. from the “Vaqueros de Bayamón” are the face of this promotional initiative carried out by the Marvel International manufacturing plant that has a history in Puerto Rico of more than 50 years. “We are very grateful for the sponsorship of local brands such as Marvel’s El Gordito who are committed to Puerto Rican players, their fans and continue to develop and support the local sport”, explains Ricardo Dalmau, president of BSN.

Under the motto “El Equipo de Gordito está bien Guillao’”, the collectible boxes of the hamburgers will be accompanied by an advertising campaign during the summer months that includes traditional media, digital, social networks and billboards around the island. In addition, fans will have the opportunity to participate in a contest for an opportunity to win tickets to attend the games in person.

“We are proud to launch these collectible boxes of Marvel’s El Gordito with players from local teams such as “Los Leones, Los Santeros, Los Mets and Los Vaqueros” because we know that they are a symbol of effort, tenacity and commitment to their sport and with the community in general”, explained Janelle Vázquez, Business Development Manager for B. Fernández & Hnos. Marvel’s El Gordito is an iconic brand of trajectory and heritage in Puerto Rico, as is the National Superior Basketball League.” For his part, Eduardo Collado, Director of the Marvel Plant, points out that like these players, El Gordito is a local product made in Puerto Rico by Puerto Rican hands, striving to always ensure the best quality and flavor. “The plant has a workforce of more than 50 employees, generating direct and indirect jobs to support the economy. The Marvel International team produces weekly more than 150 thousand pounds of hamburgers, soups, sofrito, spices and a variety of products for leading brands under the umbrella of B. Fernández & Hnos Inc. Through “El Equipo de Gordito está bien Guillao’” we feel that we not only support the economic growth of the island and sports, but also the union of our families and the fans”, he added.

Marvel International, which was acquired by B. Fernández Holdings Inc. in 2005, is a hamburger manufacturing plant in the varieties of pork, beef, chicken, among others with a leadership in the local market as well as a distribution in over 400 establishments in regions of the United States that have a high concentration of Puerto Ricans. The brand is available in states such as Florida, New Jersey and Virginia, among others. This distribution in the US is growing.

“Sport is a powerful tool for social transformation and training activity. The BSN has developed a loyal fan base since it was established in 1930. By identifying that both brands share the same values, we decided to support the league that is extremely popular in Puerto Rico to encourage fan participation by following the games that started on the 10th of July” added Vázquez. “We hope that the campaign, El Equipo de Gordito está bien Guillao’”, will help consumers to motivate themselves to follow the games and support our athletes.”